Can you eat coffee beans? Yes. Perhaps a better question is should you eat them? Let's take a look at the benefits, side effects, caffeine content, and flavor (raw, roasted, espresso) when eating coffee beans. Plus 5 ways to eat them. Also get the daily consumption limit. 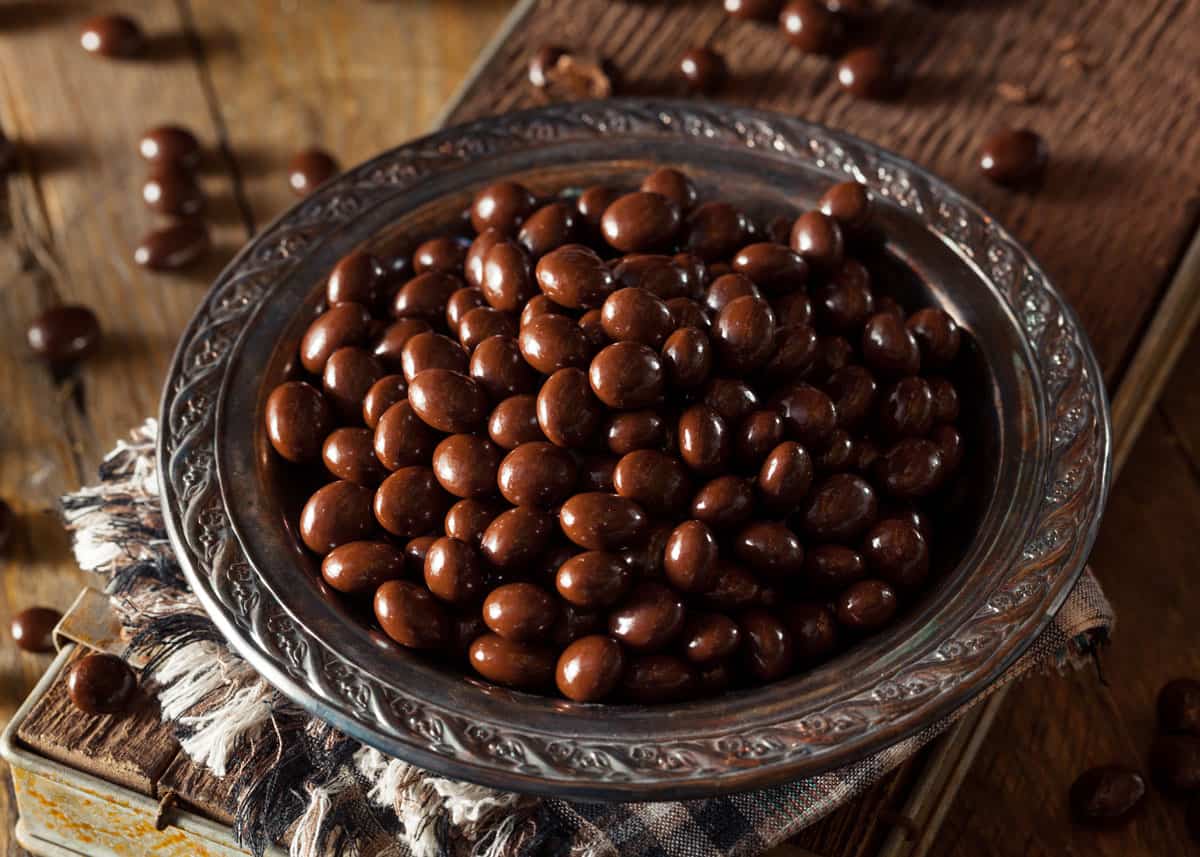 Can You Eat Coffee Beans?

Yes, coffee beans are edible. They are the seeds of the coffee plant and many coffee lovers enjoy eating them roasted and covered in chocolate.

Coffee beans (like many other seeds) contain high concentrations of certain compounds – like caffeine. So moderation is important.

Some may choose not to eat them because of caffeine sensitivity, pregnancy, or a sensitive digestive system.

And then there are others, we're talking about coffee lovers here, who like to snack on them or grind them up and add them to all kinds of delicious treats.

Let's take a look at some of the most popular questions about eating coffee beans.

If I missed yours please let me know by commenting at the end of the post and I'll do my best to answer it. 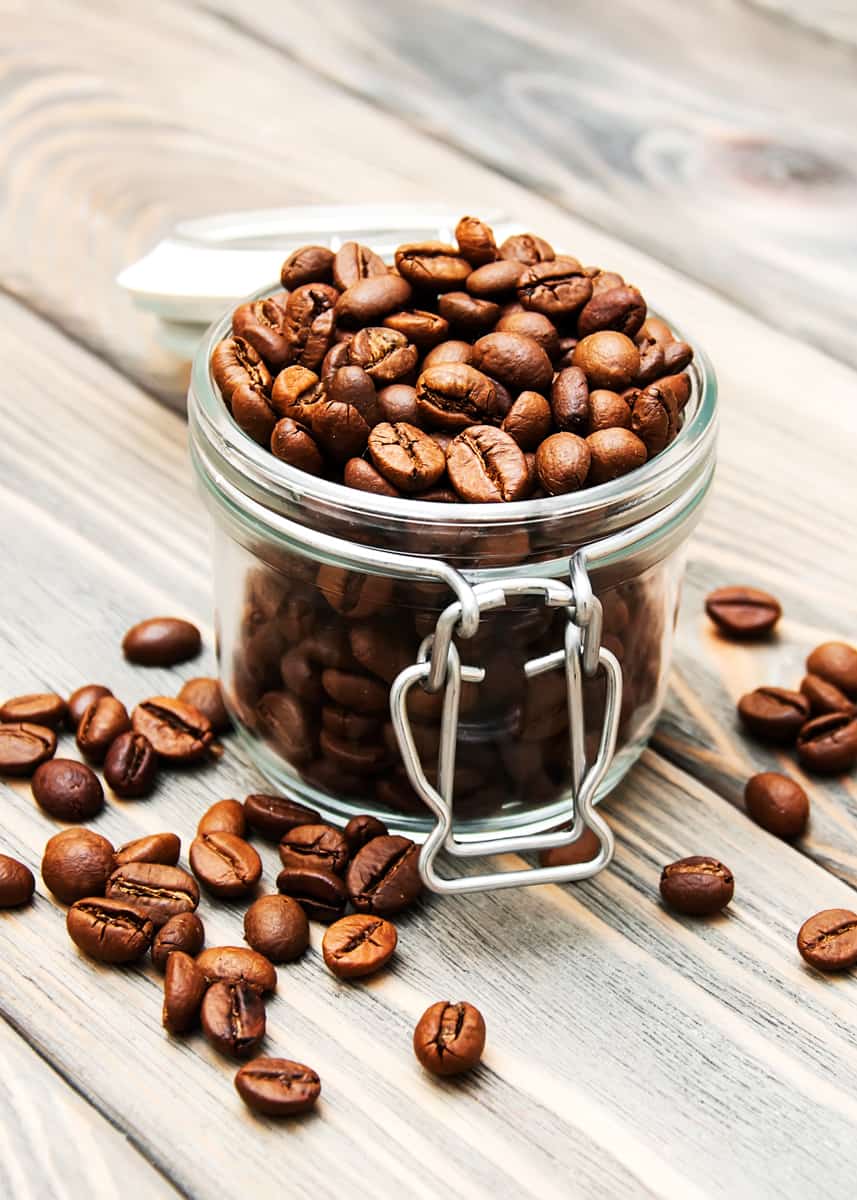 Roasted coffee beans are bitter. They taste like strong, bitter coffee. And that's why chocolate is the perfect complement.

They have a satisfying crunch, so they make a great treat for coffee lovers – that crunch, the bitter coffee flavor mixing with sweet chocolate, it's pretty nice.

While they are crunchy they're also slightly gritty. So eating them on their own wouldn't be very pleasant. The sweet smooth chocolate seems to downplay the grit just enough to make fans keep going back for more.

Can you eat raw coffee beans?

Yes, green coffee beans are edible. But not many people would enjoy eating them.

I haven't tried them yet but they are described as tasting unpleasant with a grassy/woody flavor (sounds like the flavor notes in white coffee) which is probably why we haven't seen chocolate covered green coffee beans.

They are also known to be tough and chewy, highly acidic (tough on the tummy), and have a higher caffeine content than roasted beans.

So while you can eat them, it probably wouldn't be very pleasant. How much caffeine in coffee beans?

I have no way to measure the caffeine content in a coffee bean, but what I do know is that some caffeine is lost in the brewing process. So to get the same caffeine kick you'll eat fewer beans than you would brew.

When coffee is brewed, not all of the caffeine ends up in your cup. Some caffeine is left behind in the grounds.

So eating the beans will give you more caffeine – bean for bean, than brewing them. How many coffee beans can you eat?

It's safe (in terms of caffeine) to eat around 20 to 30 per day as long as you're not pregnant or sensitive to caffeine.

And to break that down into around 7-10 beans per serving, which would be roughly the amount of caffeine in a regular 8 oz cup of coffee. That's the short answer.

The long answer is…

The biggest concern when it comes to figuring out how many coffee beans you should eat is probably the caffeine content.

According to Mayo Clinic, an average person who is not sensitive to caffeine and not pregnant can safely consume up to 400mg a day. That's the amount in roughly 4 cups of coffee. That's 8 oz cups, not big 16+ oz mugs – which is what people usually use for coffee.

I don't know about you, but for me and a lot of people I know, 4 big mugs of coffee would be too much. Two, maybe three would be my max.

So because each arabica bean has around 6mg of caffeine we're going to say that it would not be wise to assume it's safe to eat around 66 coffee beans (400mg divided by 6mg) a day. Not that anyone would actually want to anyway.

Coffee beans eaten as snacks are usually covered in dark chocolate which contains more caffeine than light or milk chocolate.

So eating chocolate-covered coffee beans increases the caffeine content. For the sake of staying on the safe side, let's say it nearly doubles it. In that case, we're getting closer to consuming 30 or so per day. This estimation would make sense because the serving size on a bag of chocolate-covered coffee beans is usually around 20 or so.

That serving size usually weighs around 40 grams (most of which is chocolate) and according to this article that amount of dark chocolate is equal to about half the caffeine of a regular cup of coffee.

When eating coffee beans it's good to keep in mind that you probably wouldn't down the maximum safe limit of caffeine all at once, like drinking 4 cups of coffee, one after another. Unless you're used to Starbucks and their super large Grande and Venti options.

So eating 20 to 30 coffee beans at once should probably be avoided as well, unless you're not sensitive to caffeine, and don't mind the jitters.

With the rough estimates above we could assume that around 7 – 10 chocolate-covered coffee beans would be somewhere close to the caffeine content in an average cup (8 oz) of coffee, around 96mg give or take.

Keeping in mind that the beans vary in size and coffee beans contain more caffeine than brewed coffee.

(More reading: Does coffee ice cream have caffeine, how much?) 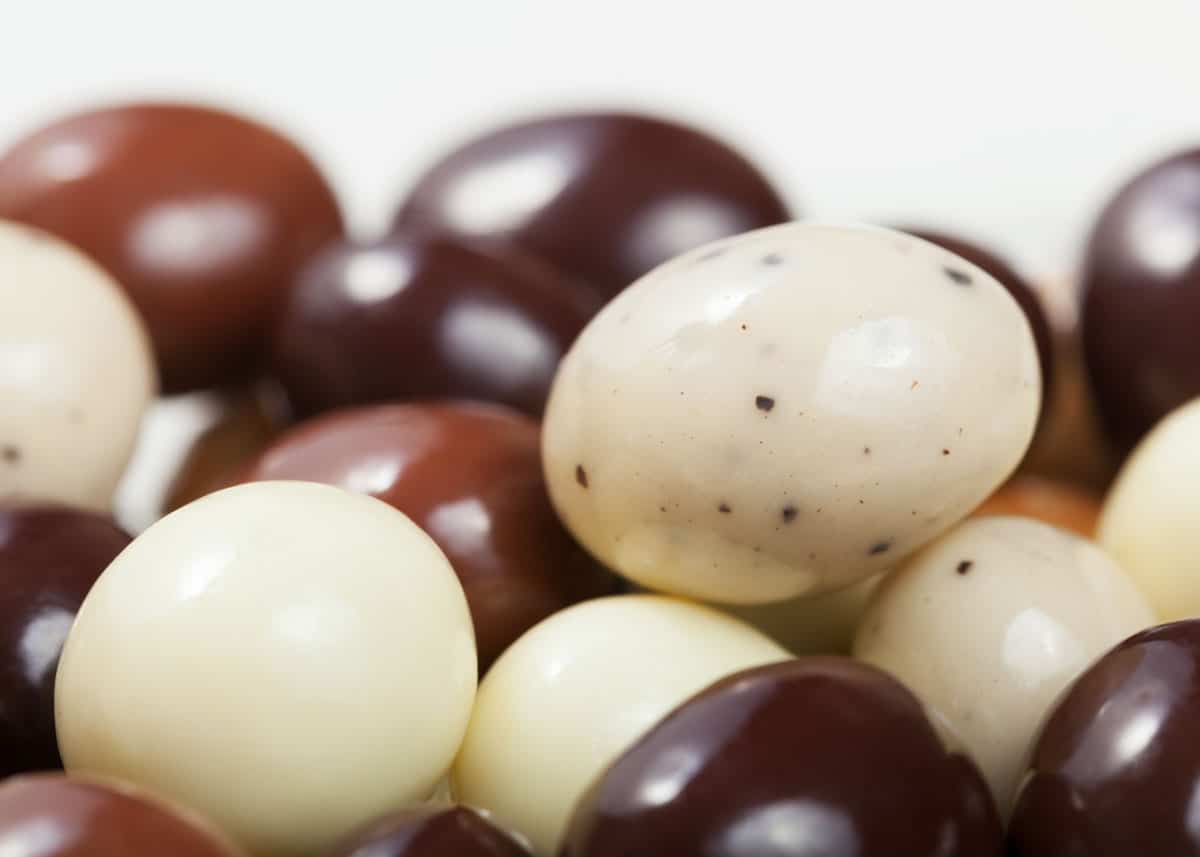 Can you eat espresso coffee beans?

In this case, it's the first option “espresso roast” because you're not going to be brewing them if they're being sold as a snack.

And you can use the same guide as in the question above if you're looking for portion size. Espresso beans don't necessarily have more caffeine than other coffee beans. In fact, sometimes they might have less caffeine because they are a darker roast. 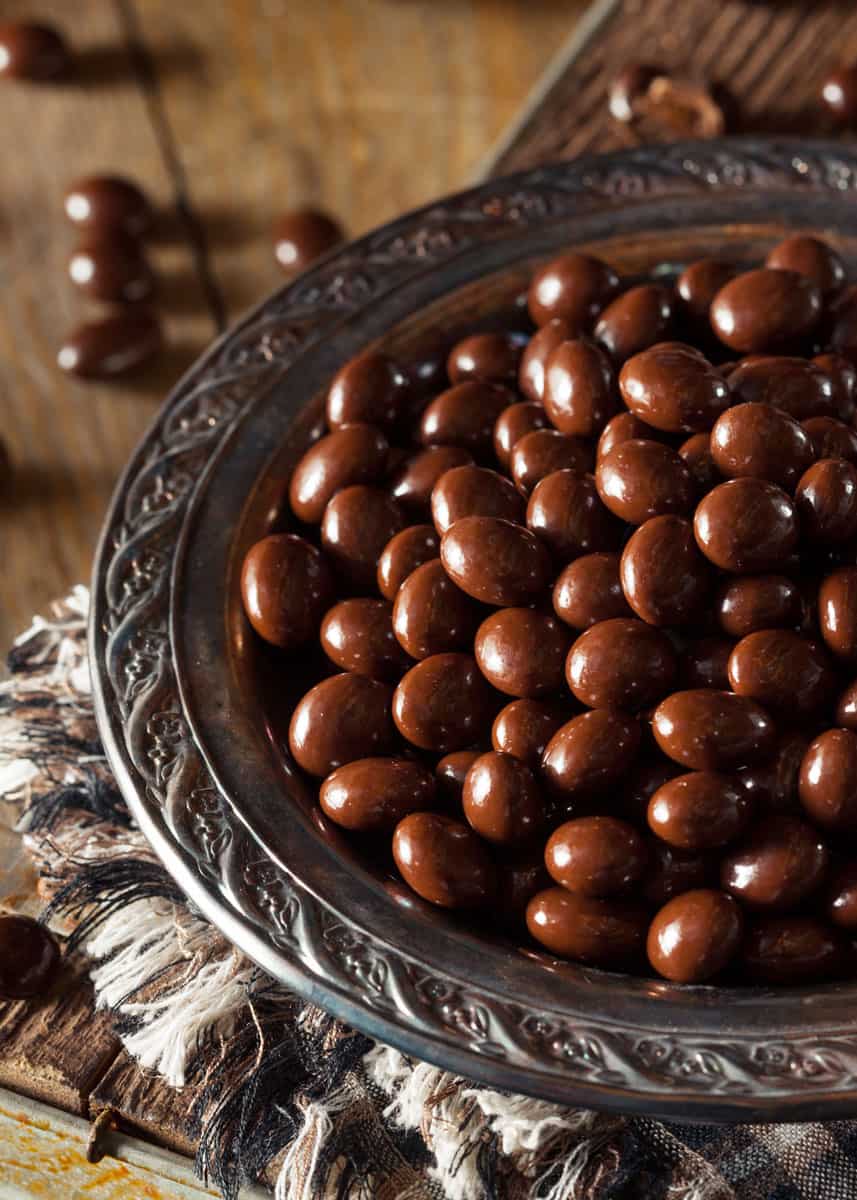 Benefits and Side Effects

As with everything else, there are benefits and drawbacks to eating coffee beans.

If you're eating them covered in chocolate the situation changes a little as well, so we'll try to keep that in mind as we consider this.

Let's take a look at some potential positive and negative aspects of eating roasted coffee beans. What are the benefits of eating coffee beans?

So, is it healthy to eat coffee beans? Yes and no. Food affects everyone differently, but generally speaking (as long as you're not caffeine sensitive) eating coffee beans in moderation will have some health benefits.

Eating coffee beans will give you the same benefits as drinking coffee. But if you're eating the beans covered in chocolate the sugar and other ingredients could cancel out some of the following benefits.

According to this article here are a few things coffee my protect you against:

And this article mentioned some of the following beneficial compounds found in coffee:

You may consume slightly more of the above compounds when eating coffee beans because they have not gone through the brewing process.

As with drinking coffee, eating coffee beans can also contribute to feeling more:

Keep in mind that when you brew coffee some of the things that make coffee rough on sensitive stomachs are removed, but this is not the case when you eat the beans.

So you may experience more heartburn and jitters when you eat the beans.

Also, the beans you are eating are probably covered in chocolate so the calorie count will probably be higher than when you drink coffee. This is especially true if you drink your coffee black or add very little to it. 4 Side Effects of Eating Coffee Beans

As mentioned above, there could be some side effects of eating the beans, as there may be from drinking the beverage made from them.

Some of the following side effects may be worse because more of the acid and caffeine remains in the bean when eaten directly.

The side effects listed below are usually only seen if the recommended daily caffeine limit (400mg) is exceeded.

Here are some of the potential side effects of eating coffee beans:

Keeping within recommended amounts (see suggested serving size listed earlier in this post) usually won't cause any problems unless you have a sensitive stomach or are sensitive to caffeine.

But what about if you're pregnant? Let's talk about that next. 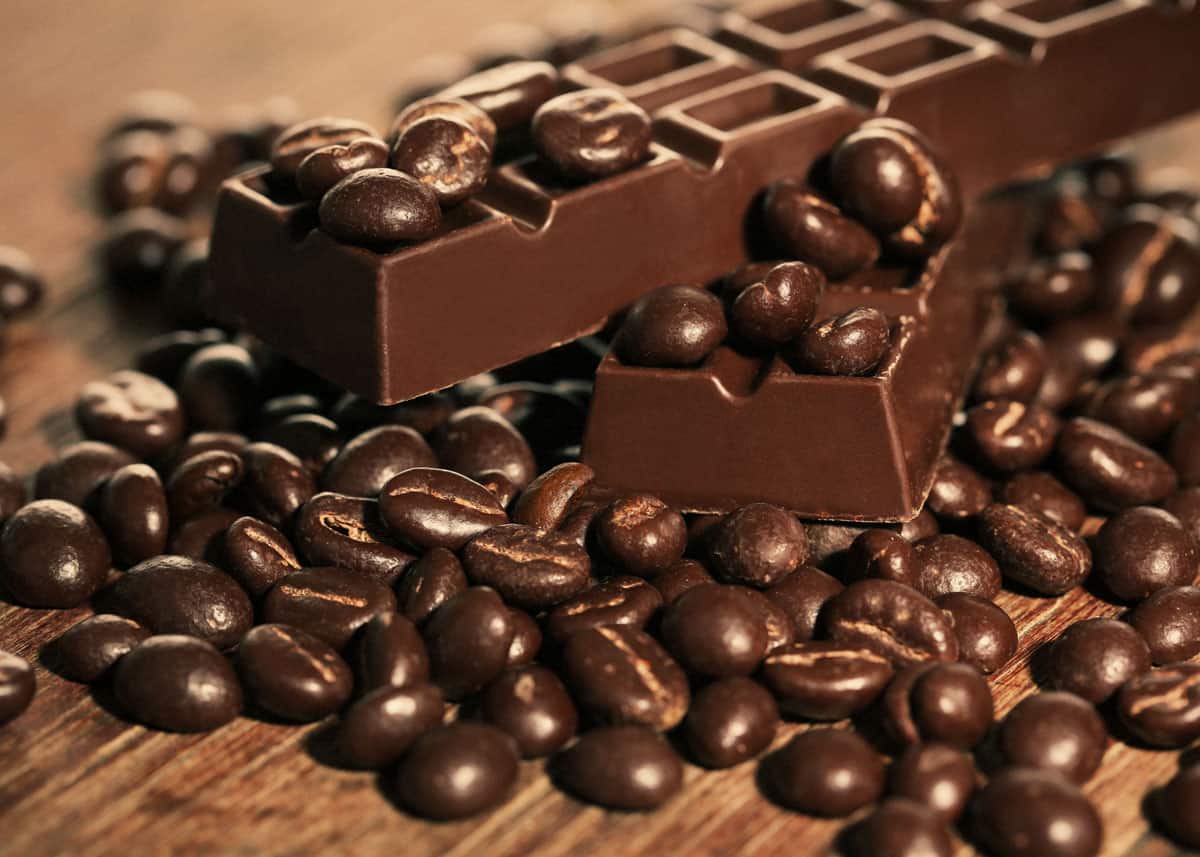 Can you eat coffee beans when pregnant?

You could, but I wouldn't recommend it. When I was pregnant I didn't consume any coffee, tea, or any other caffeine-containing beverages.

That may seem overboard but it's just how I felt about it. Here are a few things that contributed to that decision.

As mentioned in this article here are some effects of caffeine during pregnancy.

I forgot about the caffeine in chocolate while pregnant so I did eat a little, oops, but I'll step down off that soapbox now… No doubt the most common way to eat coffee beans is roasted, whole, and covered in chocolate. But can you eat coffee grounds?

If you like the sound of incorporating coffee beans/ground coffee into your diet here are five ways to do so:

When eating ground coffee beans “a little goes a long way” just a pinch or two will do it in a smoothie or as a dessert topping.

Coffee beans can be really hard so it's best to use a fine or very small grind when eating them this way. As chocolate-covered beans it's different because you're ready for the crunch so it's not a big deal, also the beans are dry and stay crunchy.

In other recipes, they may not stay dry/crunchy, they may get wet and really hard, so if they are in big chunks someone could possibly chip a tooth. Not very pleasant.

As a side note, instant coffee is not made of freshly ground coffee beans. It's made of coffee that has been brewed and then dehydrated to remove the moisture. What Do You Think?

So what do you think, can you eat coffee beans? Should you? For me, the answer is yes. And my favorite way is to eat them covered in dark chocolate.

They would also make a great gift to any coffee lovers in your life.

If you have a favorite brand or a recipe to share please do so by commenting on this post. How to Clean a Coffee Filter: 14 Tips for Better Coffee (All Filter Types) Honey in Coffee: Is Honey Better Than Sugar in Coffee? Does Coffee Ice Cream Have Caffeine? (14 Brands) How Much, Caffeinated, Decaf Can You Put Brown Sugar in Coffee? (Taste, Types, Amount)

This site uses Akismet to reduce spam. Learn how your comment data is processed. Want better coffee? EnjoyJava shares the best coffee tutorials, tips and gear to help you make the best cup of java around. Because coffee is awesome!

Interested to learn about where your coffee comes from? Here’s what you need to know about Arabica and Robusta – the two most popular coffee beans. And don’t forget the expensive (and super gross) kopi luwak coffee.

Like strong coffee? Here’s how to improve your next cup. And here are some of the best gifts for coffee lovers (we would know).